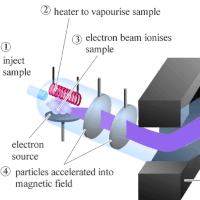 Mass spectrometers ionize a small amount of sample and then accelerate the ions through a magnetic field which separates the sample into its components on the basis of its mass-to-charge ratio. Examination of the molecular ion and mass fragments, in combination with library referencing, allows the sample components to be identified.

The most common types of mass detectors are Time of Flight, Quadruple Mass Filters and Ion trap. Examples of each of these detectors is provided in the equipment described in this web-site.