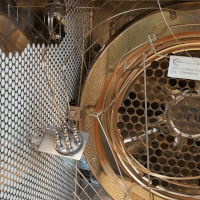 Gas Chromatographs are used to separate and analyze mixtures of volatile compounds. A small amount of a compound (normally about 1 μL) is injected and then vaporized into a heated capillary column which is coated with a stationary phase. The column in modern machines is normally 10 to 30 meters in length and about 0.25mm in diameter. The stationary phase inside the column (approximately 0.25μm – 0.50μm thick) is chosen on the basis of polarity in order to separate the mixture being analyzed.

As the vaporized compound moves down the column it interacts with the stationary phase. This has the effect of grouping like compounds together on the basis of their affinity to the stationary phase and their boiling point.By the time the sample has reached the end of the column it has been separated into its components. A detector at the end of the column is able to measure the amount of each compound present and records this, the temperature of the column and time of elution, which is then used to identify the compounds present. Identification is enabled by reference spectra, or by comparison to previously recorded GC runs of pure components.

Gas Chromatographs are often coupled with mass spectrometers for accurate identification of unknown compounds. More advanced systems couple two columns together (GC x GC) whereby the output from a non-polar column is fed to a polar column in order to attain separation of more complex mixtures.

Gas Chromatographs are extremely versatile, with a vast array of different columns and detectors allowing analysis of a wide range of compounds.